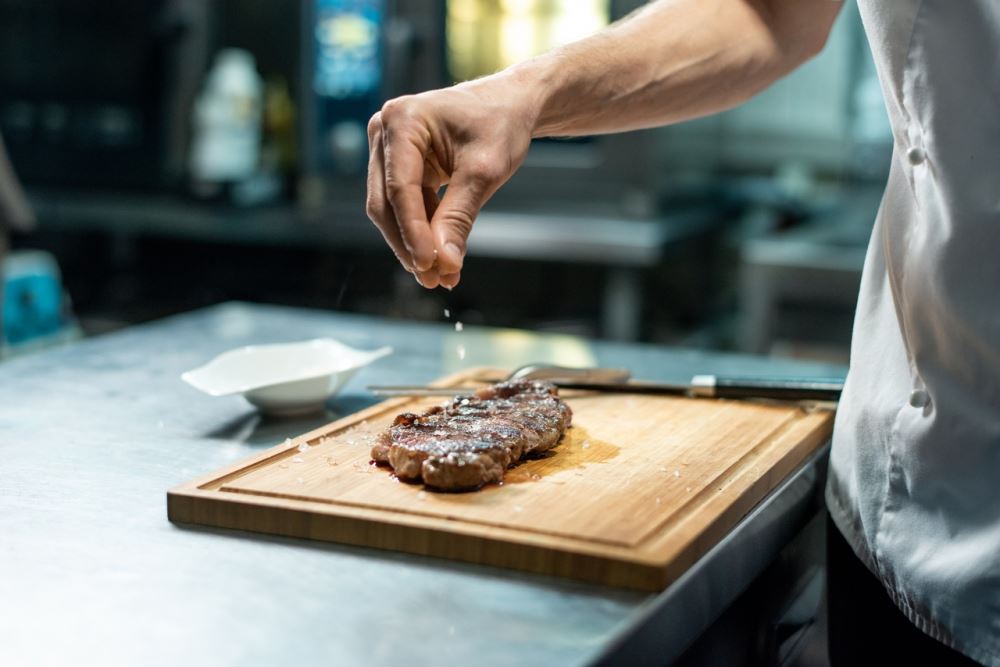 This expensive finishing salt is preferred by fancy chefs and restaurants and its popularity began in early 2000s.  Since, it has been common to see in high-end restaurants, chefs sprinkling a pinch of fleur de sel on their plates as their personal signature. This particular salt is very expensive but there are many fleur de sel substitutions.

Fleur de sel means “flower of salt” and it is a flaky sea salt. It is made by chanelling sea water onto flat plains and letting the water evporate. Then the top layer of salt is carefully collected and used to make fleur de sel. Koyuncu Salt also provides the highest quality salt with the same care. 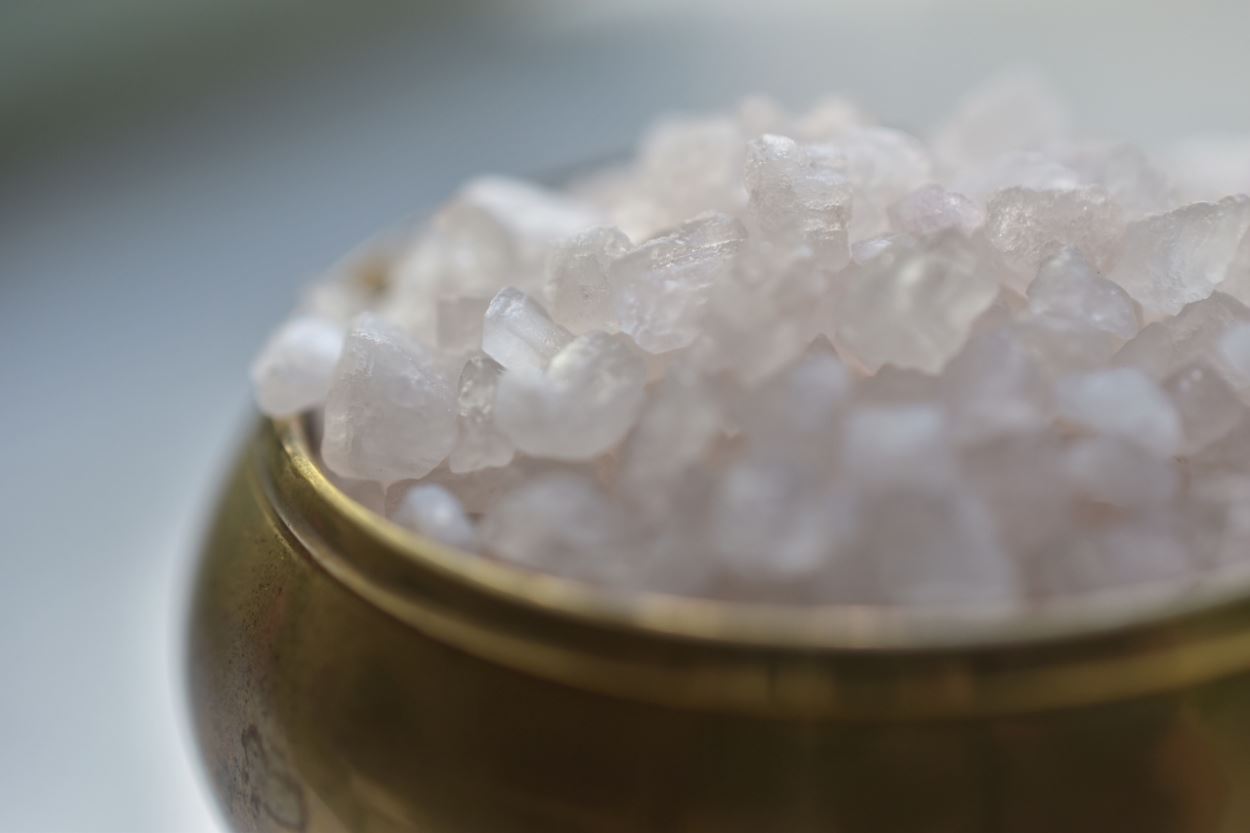 Although fleur de sel is commonly associated with the Atlantic coastal region of France, it has begun being produced in several other countries, such as Spain, Portugal and Canada.

In general, the salt is slightly damp and mostly grey or pink in color. This coloring is derived from minerals in the processing region. The flavor of the fleur de sel may also come from these minerals, and many people find that sea salt flakes typically have a "cleaner" salt taste without the bitterness of other table salts or pouring salts.

Fleur de sel is used as a last minute flavor to the dish, its flaky texture adds a rich crunch.

How to Use Fleur de Sel?

Fleur de sel is not meant for regular use at homemade dishes; it has a delicate texture and comes with higher prices compared to other salts. It is also cannot be used while cooking, if it is exposed to high tempatures, it melts and loses its unique texture and taste.

This is why it is called “finishing” salt to the dishes. It can be sprinkled on salads, fish, meat and desserts.

As a rule, the less refined a salt, the more minerals and moisture it contains. As fleur de sel comes directly from ocean without being processed, it can be concluded that it has the most unique and complex flavor. It is also “saltier” than other salts as it contains calcium and magnesium chlorides. 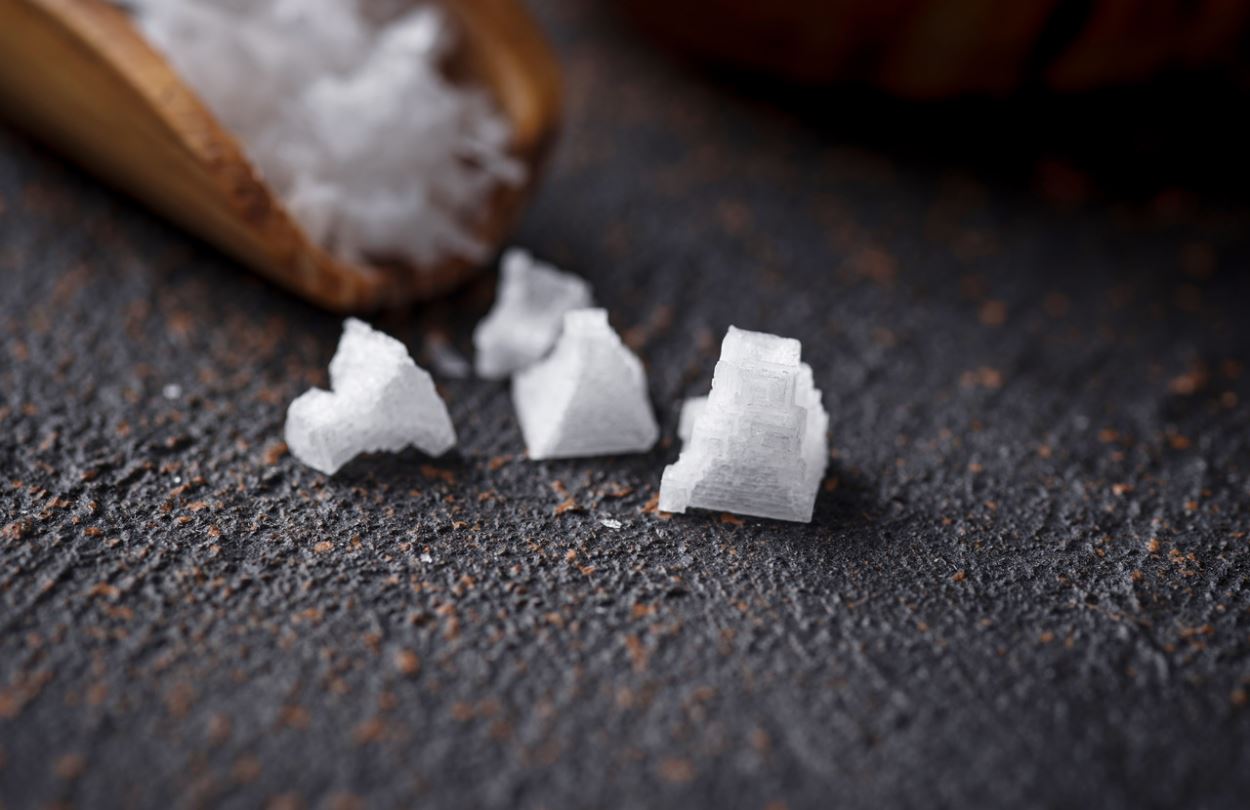 These minerals absorb moisture, pre-dissolving the minerals in the salt and delivering flavor immediately to the taste buds. Salt not only enhances the flavor of ingredients it also starts a chemical reaction in our bodies.

We have sugar sensors in our mouths to detect glucose, an important source of energy. The intestinal glucose sensor, located in our sweet-sensitive taste buds, is triggered by sodium, which alerts the cell to register flavors.

Like coffee beans or wine grapes, the quality of fleur de sel depends on natural environment and production. Salt beds are subject to the same procedures as agricultural crops; their management, harvest and process should be carefully conducted. Some varieties of fleur de sel cost up to 200 times the amount of table salt. 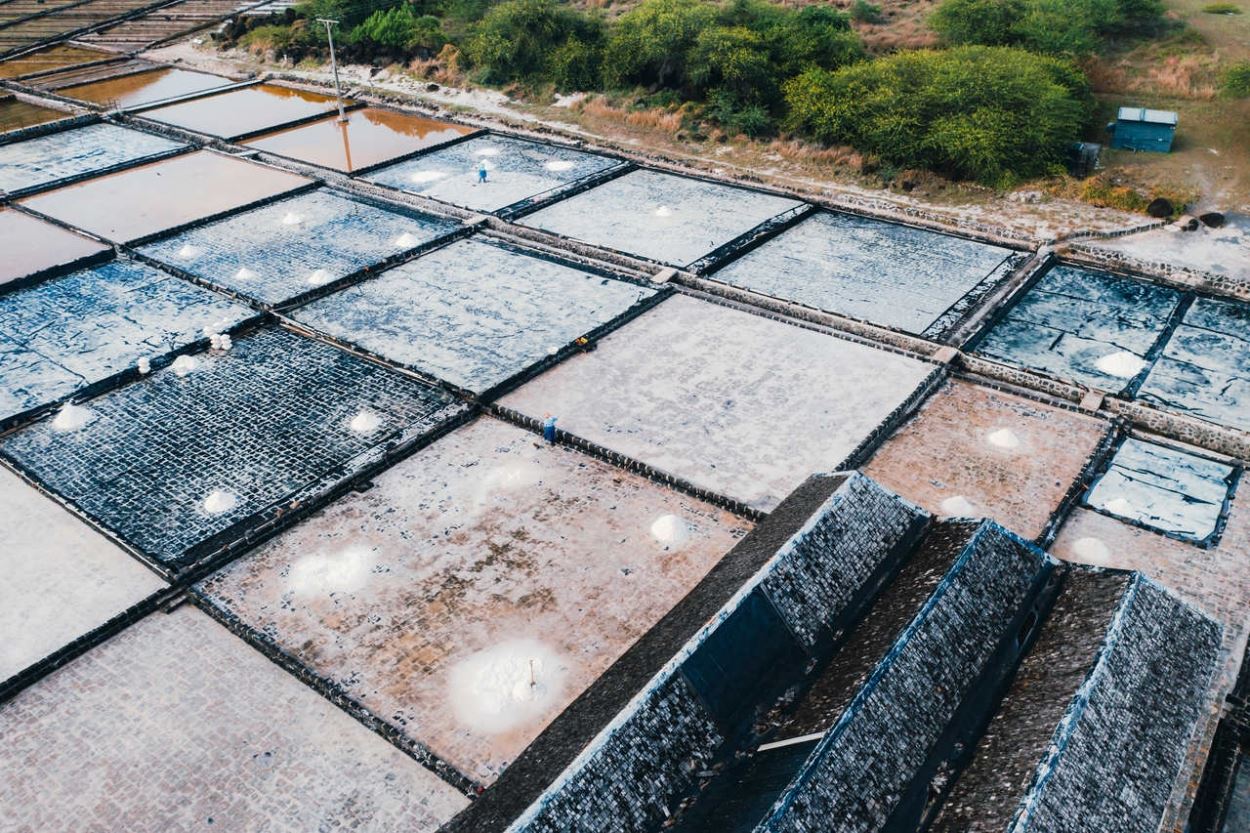 As it is soil that nourishes crops; it is sea water that forms fleur de sel. Its harvest is a very hard process; the water coming from the ocean is channeled into shallow plains, and after a certain period of evaporation of water, the salt creates a fine layer, floating to the surface. This salt is delicately collected with a rake since salt crystals are incredibly fragile. Traditionally, only women were allowed to collect fleur de sel due to their correspondingly "delicate" comportments.

When harvested, fleur de sel is made of flakes and takes the form of flat masses or hollow pyramids. As each snowflake has a unique form, each salt crystal has the complexity of a snowflake; their variation in size and shape adds up to fleur de sel’s sensation.

Due to the salt's high moisture content, the crystals often stick together and do not dissolve on your tongue immediately, letting the taste to linger in your mouth.

How Does It Compare to Other Salts? 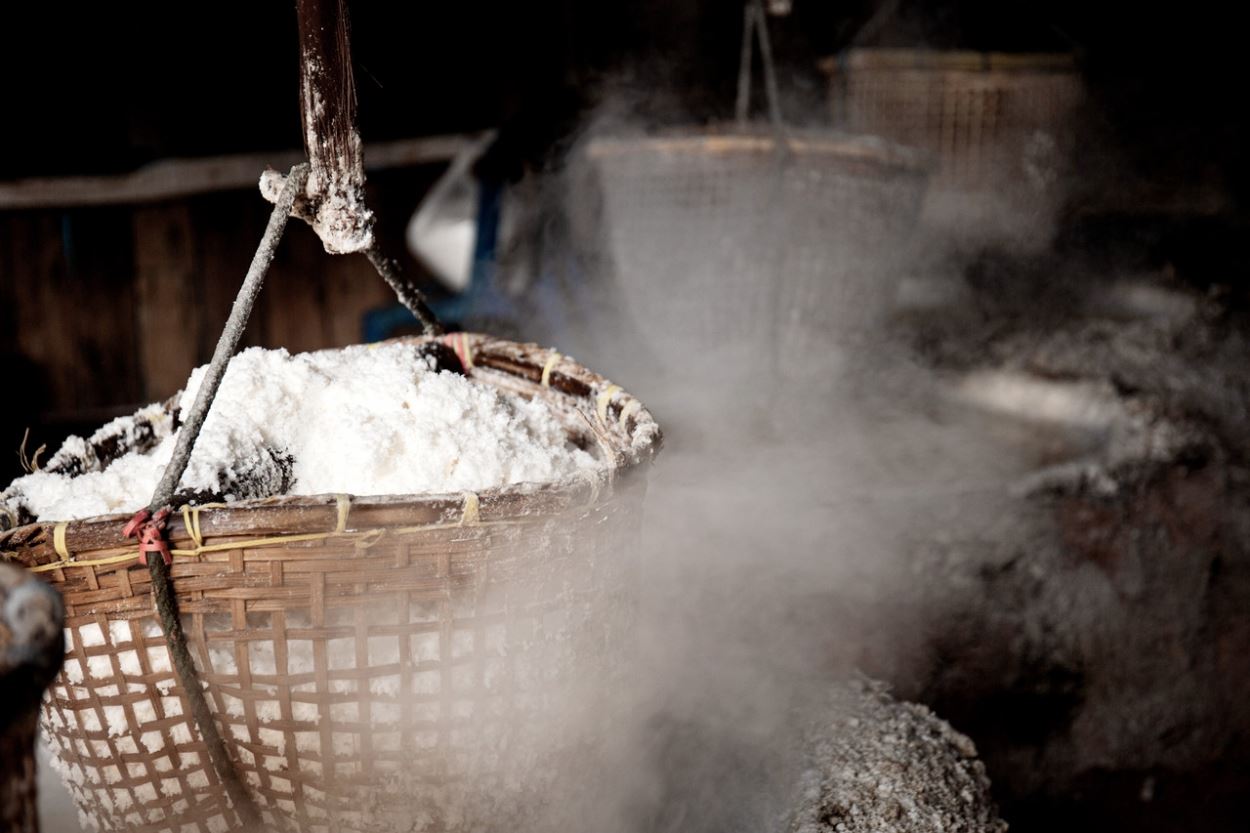 Kosher and table salt harvesting also contains evaporation, but the process and the source are different. While fleur de sel comes from the sea; table and kosher salt are derived from inland salt deposits.

These inland salt beds require water to be extracted. Water dissolves minerals and forms a brine. Then the brine is heated to evaporate the water. Unnecessary minerals precipitate, the sodium chloride is isolated, resulting in table salt.

Kosher salt is processed similarly but its absorbency is increased with manipulations during the evaporation process. It is raked to produce cubic, larger-grained crystals, holding more moisture.

If you want a near experience of fleur de sel's effects, here are some substitutes for fleur de sel.

If it were not for the fact that it is harder to find than fleur de sel, sel gris would have been the top substitute. The cream of salt is often referred to fleur de sel because it is harvested from the top layer of evaporated ocean water.

Sel gris comes from the raking of evaporated ocean water’s bottom salt layer. Due to its increased mineral content, its crystals are smaller and less regular in form, but have an even stronger taste and a pale gray hue. 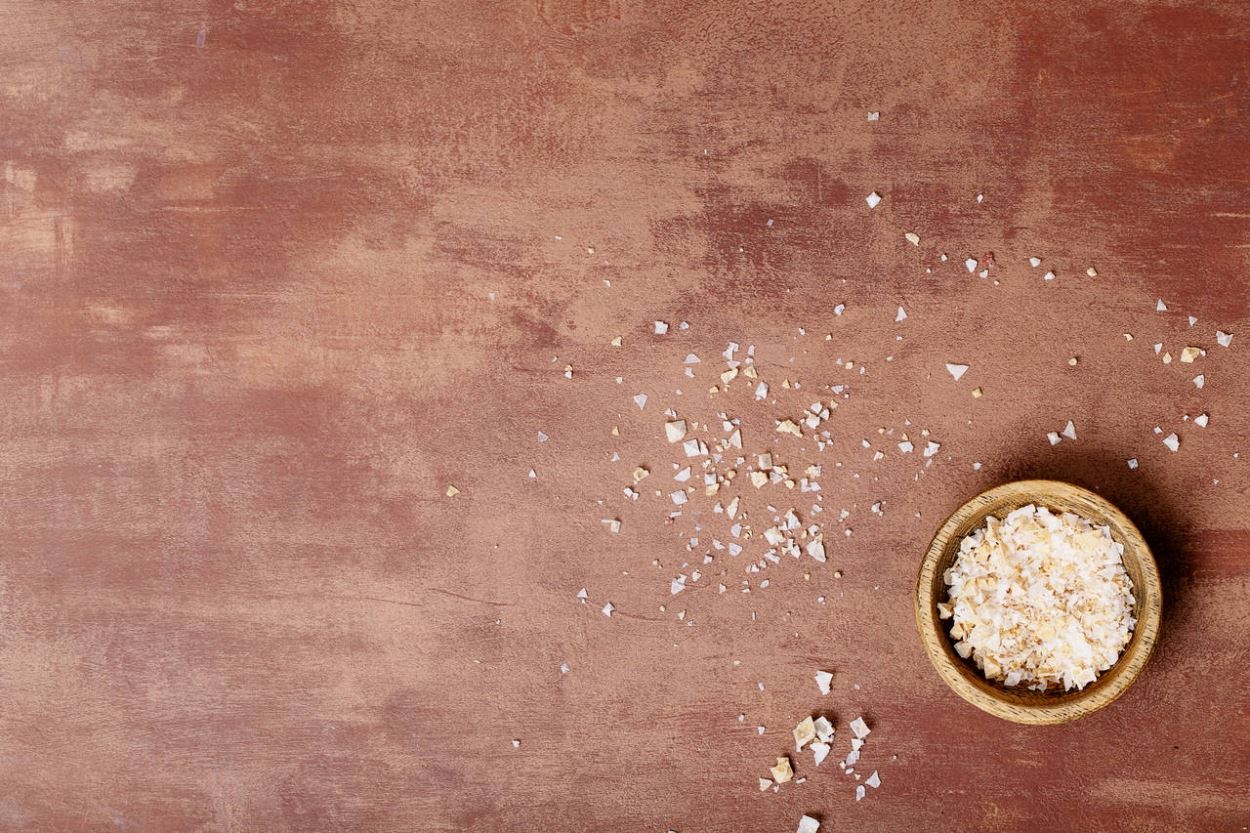 Sel gris, like fleur de sel, is a moist salt and can offer the same texture in dishes to some degree. It is preferred on meat, in casseroles and on hearty vegetable recipes, like those with beans and carrots as a finishing salt.

Maldon salt has a flat shape rather than compact granulas and called as “flake salt”. Its texture is crunchy and distinct, resembling that of fleur de sel. But maldon salt does not hold much moist so the flavor does not linger in your mouth for a long time. It's best used as a finishing salt.

Maldon salt comes from Essex in England, not from the coast of Brittany in France. This salt is known to be one of the few worthwhile ingredients that England has contributed to and the culinary World thanks to its pyramid-shaped crystals. 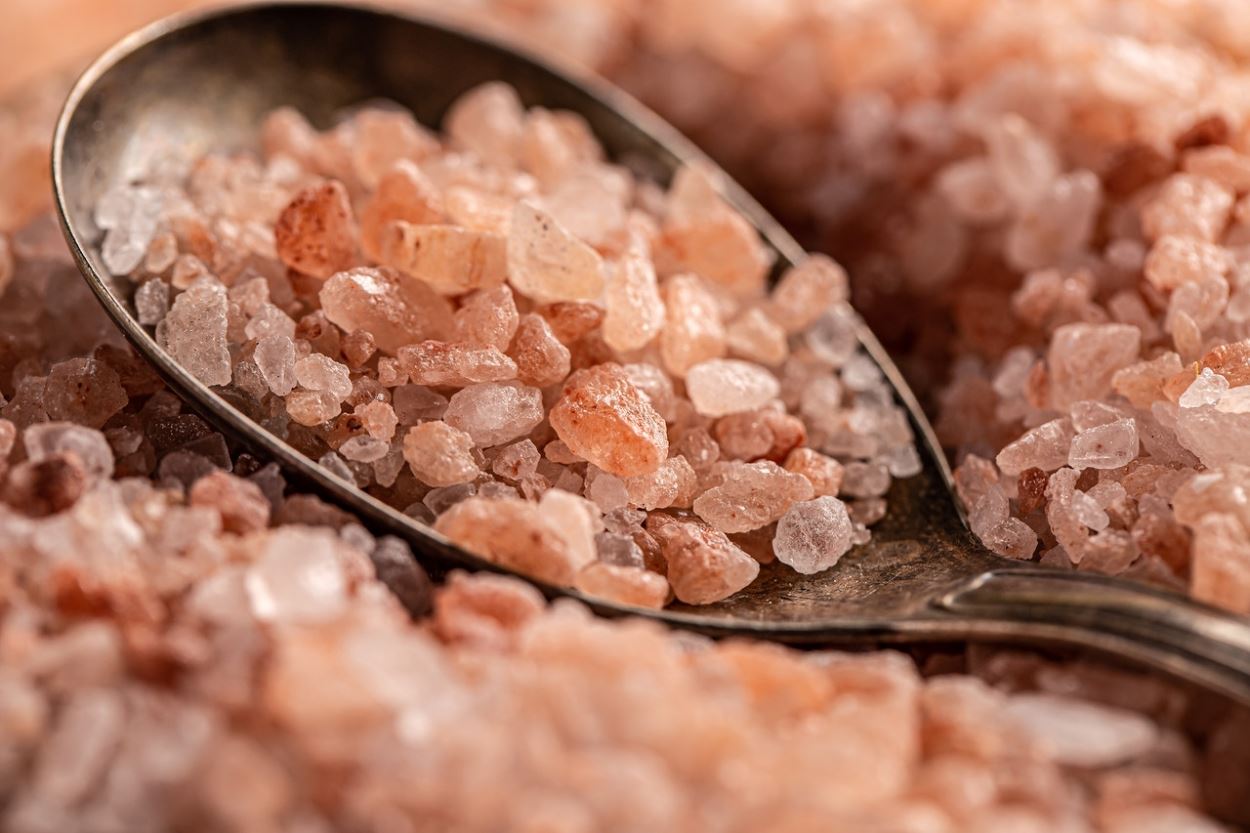 It is extracted from the salt mines of Khewra in Pakistan. Due to its mineral content, this salt is pink in color. The pink color makes a visually attractive finishing that can enhance salads, steaks, and seafood’s visual appeal. 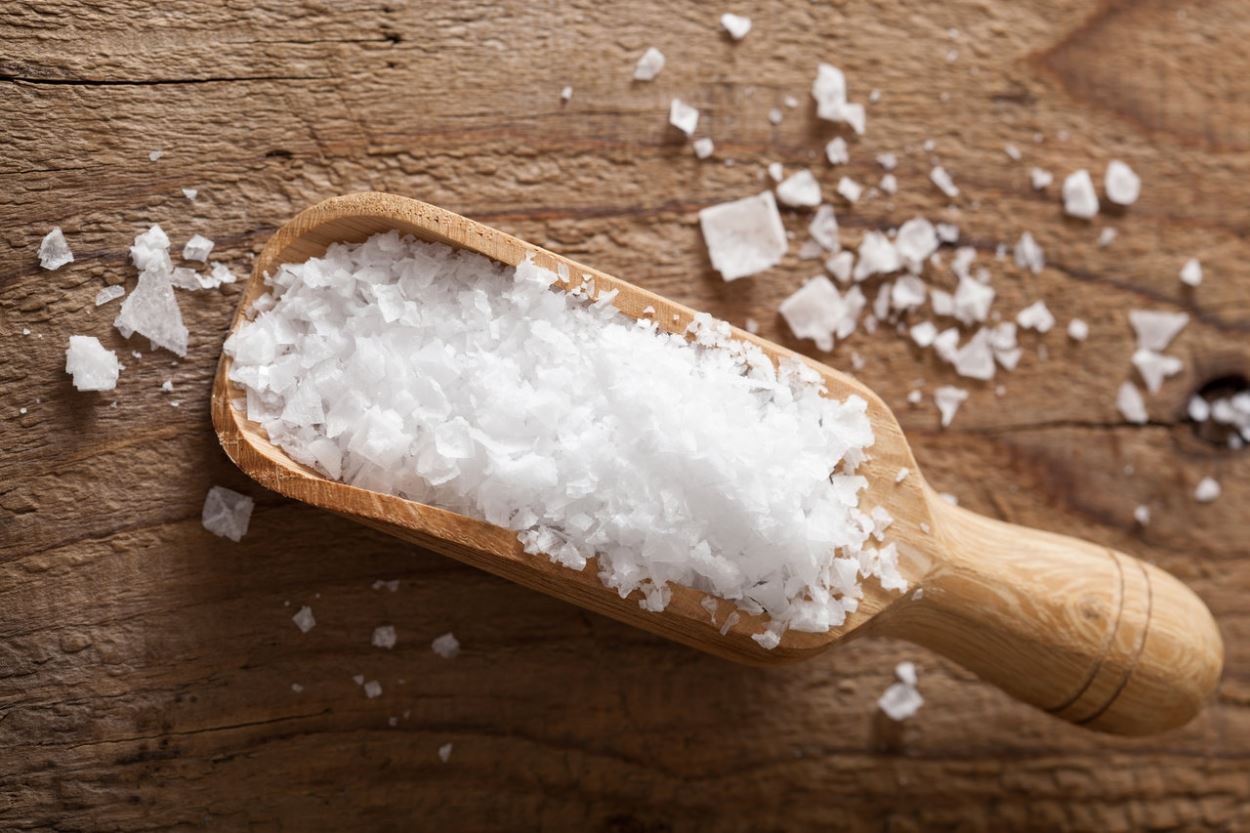 You can find many varieties of sea salt in most grocery stores for less than half the price of fleur de sel. The texture and composition of sea salt are most closely matched to fleur de sel’s: both are crunchy, provide strong flavor in small concentrations and contain similar minerals.